Three days being ample recovery from the Turkey-fest of Christmas Day, we decided to head to Halifax’s Le Metropolitain for 2013’s final Sunday lunch.

It certainly looks the part from the outside, too. A Grade 2 listed Georgian stately home where, according to the website, royalty from times of yore headed to be fed and watered. 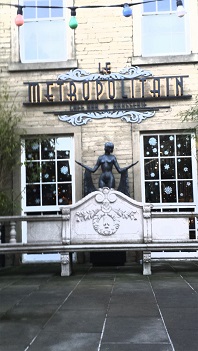 Not sure what those regal visitors would have thought about Michael Buble and Robbie Williams being piped through the speakers but we weren’t keen. If we’re going to have Big Band music, let’s have the proper stuff.

The table was completely bare when we sat down too which whilst no disaster wasn’t in keeping with what we expected from outside.

£9.95 gets you a roast each and a free bottle of house wine to share, more of which later. We chose to bang on a couple of starters too, the best of which were the scallops; fresh, seasoned properly and complimented by nicks of salty bacon and crumbly black pudding. 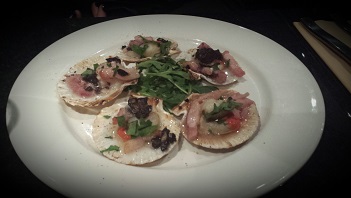 The seafood cocktail was good, too, and had the same seaside freshness as the scallops. 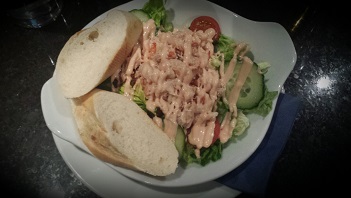 Beer and prosecco necked, we were ready for the serious business of the (‘free’) red wine with the mains.

We had an inkling this bottle wasn’t going to be up to much. Ever the thirsty optimists, however, we gave it a go…

It didn’t taste bad, it just didn’t taste of anything, really, other than weak ribena. The ‘free wine’ with the meal thing is a decent touch, but house wine shouldn’t just mean ‘cheap’. We chose a Barolo instead which was (thankfully) better, if a bit nippy for a hearty red.

Another brief point while we’re on about wine: restaurants make a huge mark-up in this department, we all know, but having supermarket staples on the wine list at triple the price is a bit brazen.

Anyway; the mains. All good here.

The slab of pork belly was succulent and buttery. The lamb was moist and tasted like the good stuff. 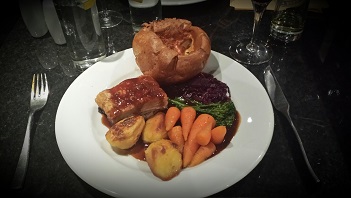 The accompanying cast were all spot-on. Carrots and broccoli had been prepared and cooked so they still tasted like veg and not waterlogged mush. Roast potatoes were crispy without tasting oily and the Yorkshire puddings could have graced any Christmas Day table with pride.

There’s obviously some sound stuff coming from the kitchen at Le Metropolitan but a return trip after the silly season might be on the cards for another go. Hopefully without Robbie and Buble.