We’ve been to the Moorcock Inn before. Then: to ditch the motor in its empty carpark – the pub “between owners” – before a ramble across the adjacent heath. I hardly gave the place a second glance; it wasn’t much of a looker and I was busy with a sausage roll.

Now, a couple of years later, we’re back for lunch and the carpark’s no longer empty. Rapturous reviews from those proper restaurant critics will do that for a business, and since Alisdair Brooke-Taylor and Aimee Turford have taken over the praise has been plentiful.

It might be one of the hottest summers on record but up here, high above Sowerby Bridge, the dour weather begs to differ.

(And we are high up. Our Uber driver becomes increasingly chat-less on the steep climb to Norland Moor and, subsequently, my hitherto perfect 5-star customer rating takes a hit. Thanks, hill. Maybe use a local firm.)

On a dreich day like this you might decide to bed in at the bar, and nobody would blame you. There’s beer from the nearby Vocation (pints starting at a hospitable £3.20) and a blackboard pimping out the likes of “black pudding scotch egg” or “smoked trout croquette”.

But today we’re eating in the stone-floored (and full-housed) dining room, its rain-lashed windows peering out over moody moorland on one side and billowing ovens on the other, whose plumes of smoke you’ll smell before you spot the place.

While those smoking ovens might hint at a return to the inglorious Dude-Food days of 2012 the scran being knocked out at the Moorcock Inn is nothing of the sort. Its website mentions “traditional homesteading techniques” and “cooking over fire”, so I’m going with “pumped-up pastoral” for the sequence of stuff we go on to neck. 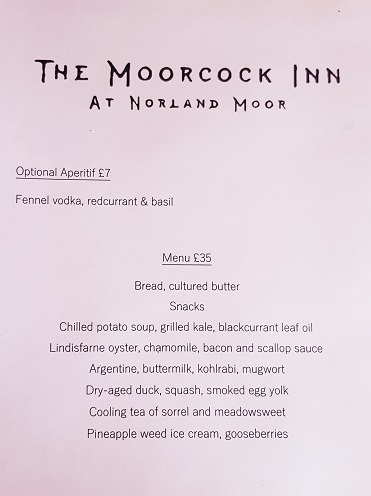 Bread (dark, tangy) and butter (lactic, mountainous) are evidently matters of importance here, which means we’re likely to be good mates for a long time. When piled on top, snacks of charred broad beans, firm-fleshed trout and a zesty homemade cheese make for a first-rate open sarnie. 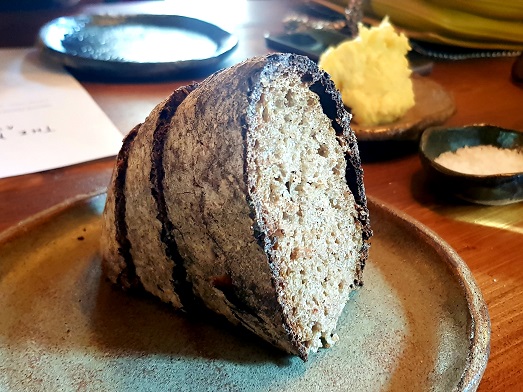 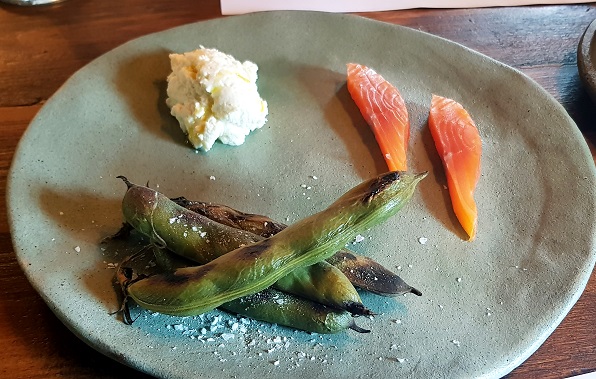 We sup a chilled potato soup – psychedelically marbled to a vivid shade of green thanks to a hit of kale – that smells appealingly of muck and grass and manages to be wholesome and refreshing at once. From there to a pearly oyster that comes with a strident bacon and scallop sauce (brilliant) for an intense riff on surf-and-turf. 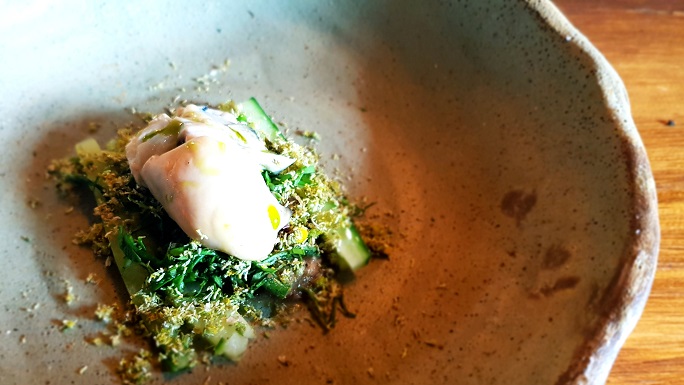 I’d like a little less fermented kohlrabi and a little more fish – as Elvis almost sang – in the next dish, where crunchy shavings of the root veg and nuggets of Argentine (me neither) bob about in a buttermilk broth.

Lightly picked vegetable, salty fish and lactic liquor don’t scream ‘comfort food’, granted, but the next time I have a dose of the man-flu it’s be this bowl I’ll be thinking of. George – alert, affable, enthusiastic – sorts us out with more bread with which we dredge the lot.

I should’ve known better than to expect a by-the-book lump of pert and polite protein from the Moorcock Inn. Here, duck comes instead as a gnarly pile of sticky and smoky strands and is as enjoyable a plate of food as I’ve scarfed this year. Christ, Brooke-Taylor’s even managed to turn the accompanying squash into a moreish sidekick, too. Stunner. 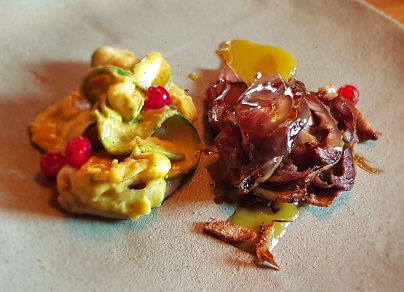 A “cooling” sorrel and meadowsweet tea would be refreshing if it wasn’t spewing with rain outside but must, I reckon, counteract some of the wine we’ve downed from a list that starts at 17 quid a bottle.

Whether you want to play it straight or go down the modern minimal-intervention route to impress your mates, Aimee is your friend when it comes to the booze so have a chat. Or have a beer; they’re good at those here.

Dessert brings to mind a levelled-up bowl of Vienetta, which is of course a compliment. Here’s a luxurious wodge of just-set ice-cream that even the steadfast “I don’t do dessert” mob (of which I’m usually a member) would struggle not to knock back in gluttonous spoonfuls. There are gooseberries, too, for zap. It’s another corker.

For this inventive, unusual-in-places and immensely satisfying fodder you’ll cough up 35 quid-a-head, which is the sort of pricing this tight-arse is fully on board with. Even if it means losing my 5 star Uber rating for the slog up that hill.