Cut me and I bleed the deep purple of a Premier Inn. I know where I am with its cheap and pretend-cheerful, its mostly-functional and its permanent honk of yesterday’s breakfast: it reminds me of me. I’m tight, and for the time I spend not-asleep in one of its rooms (shower/A Place in the Sun//bed/News//shower/checkout) It Does The Job.

So when the good people at new Leeds gaff Dakota Deluxe got in touch offering us an overnight stay with dindins thrown in I wasn’t sure. Accepting summat on the house and then expecting folk to believe a word of your subsequent opinion is apparently a bit of a no-no; but Asbestos Tongue likes going to the big branch of Boots in Leeds almost as much as she likes things that are called “Deluxe”, so insisted on it being a yes-yes.

It’s a brave move sticking the ‘D’ word in the name of your hotel, but from the low-lit reception area  – all is calm, all is well – to the grey-hued bedroom (thick carpets, massive bed, massiver TV) deluxe is what yer get. I’m not usually one for interiors – my flat’s still waiting for a second coat 4 years after the first – but even me, old Steptoe, can get on board with this; although there are approximately 29 cushions too many in the bedroom. 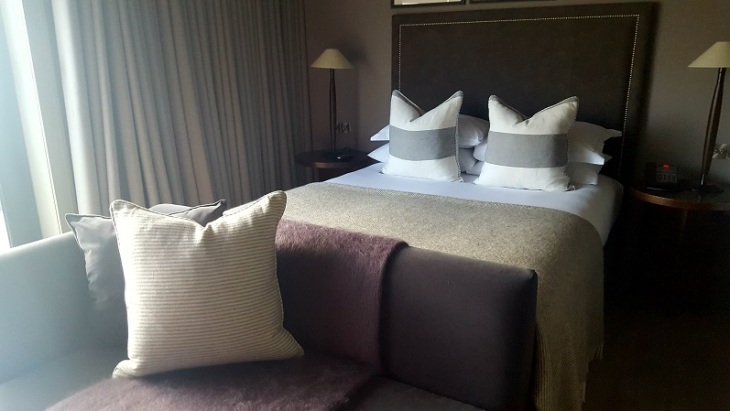 I’d pass comment on the bathroom products if I could – that’s what the professionals do – but they’d been snaffled into someone’s suitcase about thirty seconds after crossing the threshold, so I’m guessing it was Good Stuff. As impressive as the bath and separate shower were I was particularly taken by the low-level bathroom lights, enabling my routine 2am piss to occur without either disturbing my fellow slumberer or leaving a lake of off-target urine for her to wade through during her morning floss. Posh and practical.

There’s a small army of meet-and-greeters when we land in the bar, where most folk stick to the good looking cocktails but I swig a couple of over-priced Italian lagers before heading down to the basement restaurant which, like the rest of the gaff, it’s moodily lit and plushly furnished.

The ebullient George sorts us out with some decent bread made better by a Heinzy tomato soup dip (in a good way), before we get amongst some on-point pearly scallops “with Doreen’s black pudding” (nice peppery pud, Dozza) and a bowl of crab linguine, whose best bits – butter, chilli and flaked crustacean – were pooling at the bottom waiting to be dredged with more bread.

Other than a rogue Omelette Arnold Bennett that’s found its way into the “Entrees” – I think they mean “Mains” – there’s an inviting selection of stuff to go at and, thank God, no sign of the dreaded continent-to-continent mishmash of a menu that some hotels are guilty of peddling in their effort to Please Everyone.

I swerve the Sole Meuniere and go for the gruyere-crusted Halibut instead (£22); a meaty hunk of fish with a bread-crumby coating and top notch butter sauce. Chips – and these things matter – are exemplary; either good spud, good fat or a combination of both. 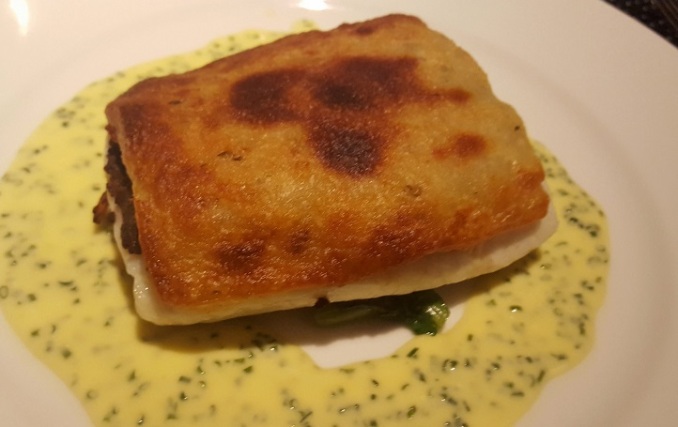 A plump piece of well-bronzed chicken (£17) – not dissimilar in tone, actually, to some of the cocktail-swillers out on the Greek Street terrace upstairs – comes with a verdant slick of pea puree and nicks of salty bacon, and is a proper tasty chunk of nicely cooked chuck. Sound cooking, this. 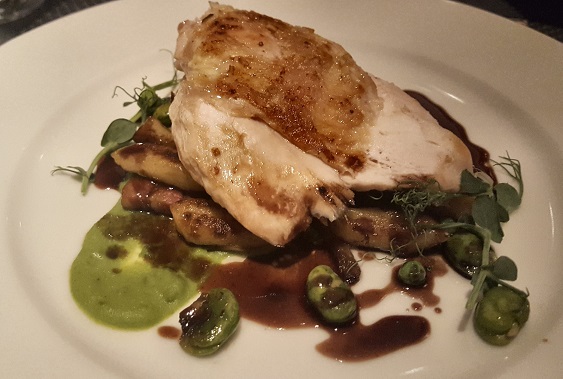 You can have a couple of more-than-decent bottles here without leaving the £20s*, which is what we do, before scurrying off to watch the last 7 hours of the Foo Fighters Glasto set on the Imax back in the room. (*Prices do go north of that but not stupidly so.)

I wake for breakfast, refreshed after a solid kip thanks to the black-out blinds and fancy bed, to Dave Grohl threatening to do One More Song.

So would I go again on my own coin? Well, not to the Leeds spot when I live a train ride away, but for folk travelling to an established “weekend break” city looking to upgrade, to enjoy a spot of luxury and to swig free Nespresso coffee just because it’s there, Dakota Deluxe delivers.

Asbestos Tongue’s been eyeing up the Glasgow place already.