Like schmucks, we missed the recent 50%-off-yer-bill promo run by Black Swan to celebrate their birthday, but a maiden visit to this Call Lane boozer delivered enough promise to suggest you’ll get your money’s worth, and then some, even when required to pay full whack. Heartening news for the tightwads amongst us.

It’s a fair old space. Downstairs is sectioned off into ‘pub bit’, (Beavertown and Odell representin’ on this occasion, along with a few trad beers for those who’re bored-of-the-hops,) and ‘pizza bit’, where boots can be filled on some handsome looking sourdough jobs. (£6.95 – £9.45;  2 for 1 on Tuesdays.)

There’s a ‘lite bite’ menu, for which I can only conclude someone forgot to run spellcheck before they signed it off. (Sez me, I know.)

Upstairs, a proper looker of a dining room is where, according to the ‘food concept’ (ugh), you’re on “fine British food meets Yorkshire grub” turf. We ordered from this menu but, ever the rebels – and to be nearer the bar – we ate downstairs.

One foot here might resolutely be in ‘pub grub done proper’ territory, (no bad thing, of course) but, going on what we put away, the other’s striding out to ‘restauranty stuff’ land; a welcome double act that means your food comes nicely tarted up and in plentiful proportions.

A piping hot wine and cream broth is neckable on its own, never mind about the handfuls of plump mussels bobbing about within. Flecks of red chilli don’t just make up the numbers but add a no-messing, brow-dabbing thwack. (£5.95)

The black pudding potato cake – gutsy former, embedded in crozzled latter – is blinged up with the addition of duck egg (money shot obtained upon yolk breach) and a smattering of capers for twang. (£6.50)

No surprise to see fish and chips make an appearance, but while some boozers go for the ‘insipid and bland but it’s bigger than the plate so they’ll be happy’ approach, here you get a fat meaty fillet – steamy and fresh – in a dark-tinged but light-textured batter. “Refined” might be the word. (£11.95) 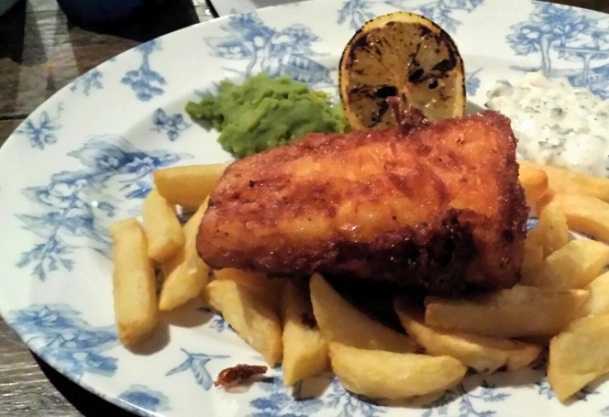 Chips were closer to the ones you might get in your local chippy than many other pubs pull off, but where f&c are concerned my feedback would be, as per: embrace the grease. Especially now everyone’s saying it’ll make us live forever, or summat.

A slab of belly pork (£12.95), confit’d, spoonable, and, moreover, its accompaniments, were a successful nod to the loftier aspirations of them in t’kitchen. Contrasting sweetcorn textures; charred, and a spot-on puree (like mayo with a conscience) – kept things interesting, and the addition of chorizo can only ever be viewed as agreeable. Those onions, pickled in red wine, would, sold by the half pint, make a cracking and distinctive bar snack.

Kale had been fried. Too right. 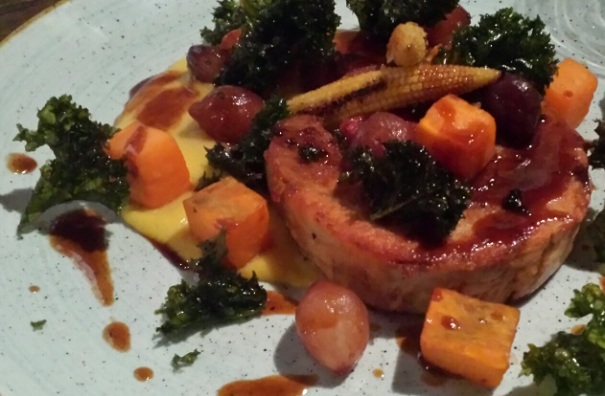 It’d be reet nice if you followed us on twitter.