I could be exiled for this.

As a son of the shire, to confess my ambivalence towards the Yorkshire pudding on any day does my regional credentials no good. To do it today – on Yorkshire Day, no less – is particularly risky, but here we are.

Nah, not arsed with them. At home they’re not worth the gamble. Save your pink-faced stress, your angry panic and your neck-craned oven-oggling and just hand over some extra roast potatoes, ta. And, eating out, it’s rare to find one that – stale, dry, bland – wasn’t knocked out several hours ago. But still, as long as they’re MASSIVE, who cares, eh?

(As a kid we had them as pudding; thick, dense and doused in raspberry vinegar. French. Much better.)

I mention the YP because I had one with a top-drawer Sunday lunch at The Brunswick, up there at the top of Leeds, and for once I scarfed the whole thing without it being siphoned off to other more interested parties. Yep, The Brunswick’s Sunday offering is a good ‘un.

It starts with a punchy shot of Bloody Mary, and I can’t imagine not having kind words to say about anywhere that chucks in some steadying booze with the scran, early doors.

The menu – a handful of mains, a few sides, one dessert – doesn’t faff about, and after a lively one the night before, faff-free is good. The beef welly’s tempting but needs to be ordered a couple of days in advance, at which time I was probably making empty promises to myself – again – about having a virtuous weekend and maybe knocking out a beef wellington.

No loss, because the topside of beef we have instead provides quite the bovine hit; sheets of the stuff falling apart with mercifully minimal effort. I can’t think of anywhere I’ve had better beef of the Sunday variety, actually. (£13) 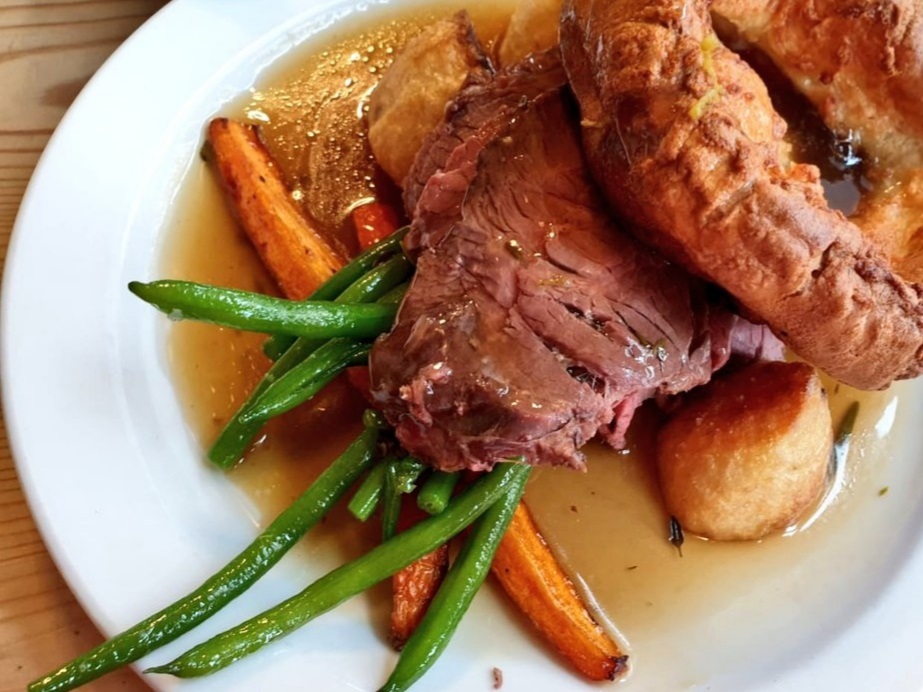 Some more crispy rattle on the roast potatoes would be nice, but they’re still golden and good, and underneath the lot lays a generous scattering of vividly fresh vegetables, with vibrant green beans and a couple of roasted carrots both cooked to bite-retaining done-ness. Amen to this simplicity, especially as we nearly eat somewhere that, on a second look, appears to serve baby sweetcorn with Sunday lunch. The animals.

I prefer The Brunswick’s lighter, natural gravy to those seriously dense, heavy versions that animal carcasses have been roasted and reduced overnight to produce.  A slice of cheap bread to dredge through the pooled remnants here would make, for me, an excellent dessert.

Underestimating the offering significantly, we’ve ordered sides too. There’s a bubbling pot of molten cheesy leeks for allium hum, meaty mini-sausages wrapped in bacon to be downed in a salty one-er, and – a tad leftfield but hey, for the vitamins – garlic-laden broccoli.

They know what they’re doing at The Brunswick and I leave restored, refreshed and re-drunk. And yes, the Yorkshire pudding was massive, but it wasn’t stale or dry or bland.