Damn them. Damn The Northern Quarter Restaurant and their welcoming, warm-natured ways. It’s their fault we necked the wine that resulted, allegedly, (definitely) in one member of the party crawling to bed that night.

We all know it can go (and has gone) horribly wrong, can the old Sabbath Day scran. But put your faith, and your brass, in their direction, get knee-deep in gravy, and be safe in the knowledge that all will be well.

Curtain raisers included a salad of posh, candy-striped roasted beetroot with salty feta and spiky dressing. It’s an option that allows the scoffer to pretend they’re being healthy (feta’s part of the Mediterranean diet, right?) despite having half a mind on the incoming pork crackling. You can have this as a main, which probably arrives in a bucket, so generous is the starter version. 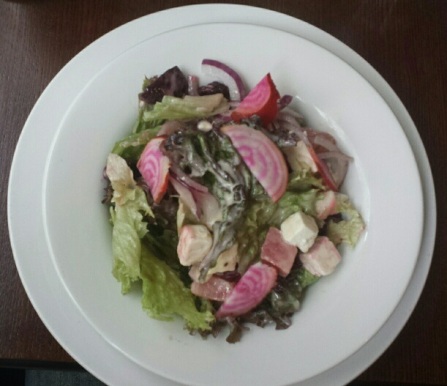 There’s some peppered Lancashire goats curd knocking about too, which is never going to be a bad thing, as well as the ubiquitous ham hock terrine that’s smoky but could do, according to the tight non-sharer eating it, with a bit more salt. 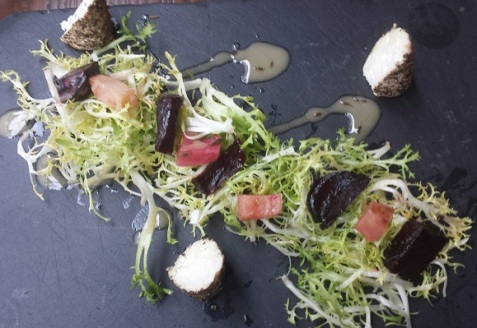 For the main event someone’s sourced some quality meat and, thankfully, hasn’t arsed around with it too much.

Both the lamb and the pork (suckling pig from a fella called Barry if you want to get all Observer Food Monthly about it) are tender, deeply flavoured and a complete contrast to the bland, leathery stuff regularly sent out by places who think it’s ok to send below-par food out because they’re only charging tuppence for 3 courses and there’s a playground outside for the kids.

Barry’s pig is well worth each of the extra two pounds the supplement demands. Cheers Baz. 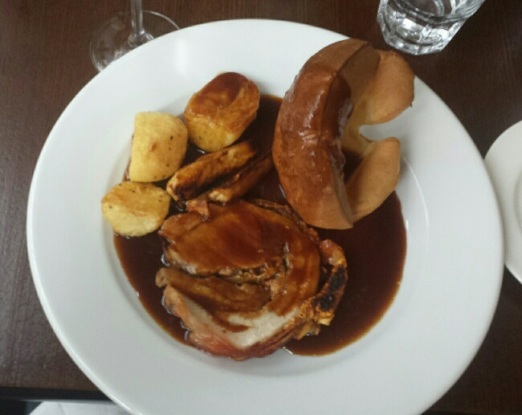 Let’s exalt in the trimmings, because when someone’s been bothered to do ‘em properly, you should.

Hey, shit-pubs, look what can be done without resorting to shoving depressing lumps of veg, their glory days long behind them, into the microwave.

Equally good is the cauliflower cheese, spiked, by a thoughtful member of the kitchen, with a few drops of pungent, enriching truffle oil. Works a treat, ta very much. 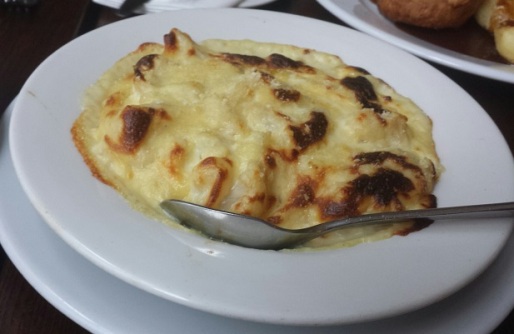 Bonus points are scored for sticking a Yorkshire Pudding on each roast, unlike some places where, being traditionalist dicks, they prefer you to meekly raise your hand and shamefully ask for one, unless you’ve played a straight bat and ordered the beef. Get with it, stiffs.

Let’s fess up. It’s £16.95 for 3 courses but, due to a wine-induced memory malfunction, desserts are difficult to recall. There was cheese.

The 2 courses we can recall (£13.95) were excellent value (stick a tenner on and we’d happily pay it*) that came from a kitchen not content to ‘get away with it’ just because it’s a Sunday. The lot was facilitated by people at the front who give the impression they quite like doing what they do, and who are excellent at doing it.

Aye, quality all round.

We had a lovely wander round the Christmas markets after lunch, according to the photos on my phone. News to us.