We love a bustling city. One where – day or night, rain or shine – energy, life and atmosphere are a constant and consuming presence.

For our latest jaunt, however, we went to Derby.

We’d done the usual trawls beforehand looking for somewhere to eat but only two places had jumped out. One of these was closed so the decision was made for us.

Dotted amongst the mostly excellent Trip Adviser reviews for the Exeter Arms lurk a handful of negatives, met with some entertaining responses from the gaffer. We decided a lunchtime reconnaissance mission might be in order.

You’re met with the comforting, vinegary waft of home cooking as you approach and the hustle of a popular bar when you enter, where the Liquid Lunch seems to be alive and well; the place was rammed. After a couple of lunchtime liveners ourselves we returned in the evening. Rammed again.

We’d read that unless you’re a regular getting served at busy times could be a task, but that wasn’t the case here; the bar staff were equally hospitable to each wave of thirsty punter.

The Exeter Arms does generous portions of really good home cooked staples with occasional twists. (The ¼ goose in a basket I wanted had sold out.) There’s a desire to feed you well without trying to be something it isn’t.

Scotch and Roll (scotch egg, two mini sausage rolls, brown sauce) was proper pub food – an accompaniment to the beer – and would have been enough for 2 to share as a starter but in order to get the full pastry hit we’d also ordered the Pigeon Wellington. Gamey meat and earthy mushroom sauce made this perfect winter fodder and probably the dish of the evening. 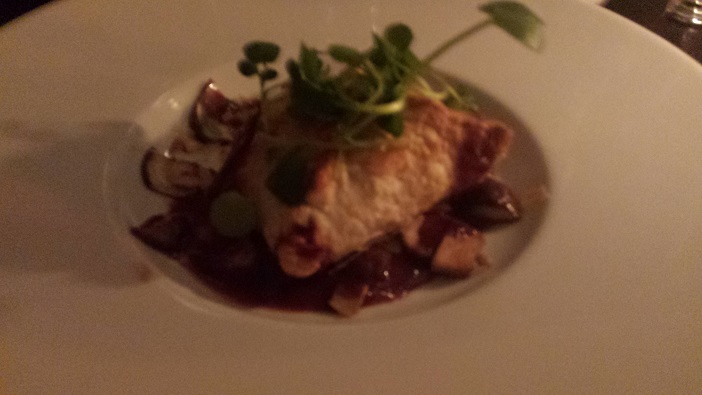 By the time the mains arrived our appetites were well sated but, committed to the last, we endeavoured to soldier on.

The mac and cheese could have been saucier but that’s a personal preference and at 8 quid I wasn’t moaning. The burger thankfully hadn’t been faffed around with too much and, if we hadn’t gorged the starters, would’ve been wolfed down.

Pub chips should be good but often aren’t. These were top drawer and the addition of chorizo and cheese ensured a healthy thirst was maintained. (The pub’s part of the Dancing Duck Brewery family; the beer selection here was a big pull.)

Winner of Derby’s ‘CAMRA Pub of the Year’ and ‘Best Pub’ in the local food and drink awards, the Exeter Arms doesn’t pretend to be anything it’s not. You order at the bar. You’re elbow to elbow with the locals.

It’s a pub and it’s all the better for it.