When it comes to being fed, we’re simple beings, really. All we want is a bit of character, a dash of passion and the ability to bang some nice stuff on a plate without faffing about with it too much.

Chips are always welcome, too.

Alas; there were no chips here, but we got everything else our greedy eyes look for from the Donostia Social Club van, currently residing at Trinity Kitchen in Leeds, but not for much longer. 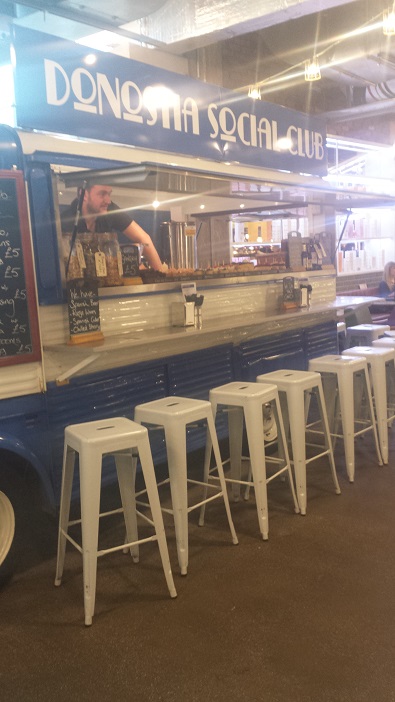 Fair play to Trinity for playing host on a monthly(ish) basis to an array of street food vendors from hither and thither, all of which have looked and smelt the part on our visits. But it’s Donostia Social Club who’ve managed to meld the street food feel with the communal, whilst getting top scores for food in the process.

Anyone who can get a cold beer in your hand moments after you’ve plonked yourself down is going to be a good host, and so Paul – the gaffer – proved to be.

As the stools at the side of the van filled up we made inroads into some of the cold pintxos displayed flirtingly on the bar, all of which can be filed under ‘good things on good bread’. We had fresh, firm crayfish (two of); moreishly tart goats cheese; and morcilla – rich but not overbearing – topped with a quails egg. 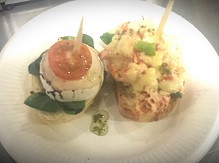 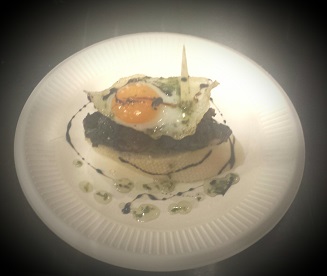 Top-notch ingredients not faffed around with too much and only £2.50 each. Go Donostia.

Onto the hot stuff.

The fabada made for perfect autumnal sustenance.The beans were melty but still had texture; the hunks of meat were smoky and yielding; the paprika broth was thickened enough to insulate the ribs.

The Moorish lamb chop managed to be toothsomely charred on the outside and, despite the punters and orders racking up, was still just the right side of pink. It was the kind of chop you don’t let out of your sight until the bone’s stripped bare. 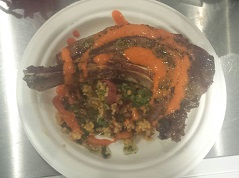 There was more of the good bread with the stew and, with the chop, a smattering of punchy couscous. Fiver for each.

We washed all this good stuff down with a couple of glasses of Rioja. As DSC is licensed there was the worrying possibility that we’d never leave.

The nearest we’ve been to San Sebastian (where Donostia gets its name from) is when Rick Stein hotfooted around the region a few years ago. What we ate here is what we imagine Ricky-boy tucking into on his travels.

We’ll get there one day but for now will settle for a return visit to Trinity Kitchen before Donostia Social Club move on. A very good start to 2014.