I stand by what I tweeted at the time, which was, for the masses with better things to do than monitor via social media what it is I’m inserting into my face at any given moment:

“The butter served at Hibiscus may or may not be the elixir of life, but I’d happily be the guinea pig used to prove or disprove this theory.”

I know, I never thought it’d be possible to get frisky about butter either, but here we are. There was summat lactic and tangy about this stuff that struck a chord and furred a happy artery deep within. Can’t overlook the bread*, either (soda, as it happens,) which tasted – in spite of the ‘quick’ rise – gnarly and (oddly, brilliantly,) long proved.

If you watched that thing recently where burger van owners were hoiked up and dropped into Michelin-starred kitchens – whereupon they’d vow to do “whatever it takes”  before threatening to leg it after about half an hour – you might have seen the poor bugger tasked with prepping eggshells for the Hibiscus amuse bouche.

Within that laser-guided cut-off was a mushroom and coconut foam topped with curry powder. We’ll call it unusual, but pleasant enough that I knocked it back pretty much in one go.

For squeamsters not keen on the idea of necking snails, imagine, texturally, globs of just-melted cheese and you’ll be there or thereabouts. These, of the Herefordshire clan, were sitting amongst snicks of creamy burrata and within a weighty, stunningly good Bordelaise sauce.

Two stars or not, bread and gravy will always out, and being by now about 3 pints pissed, I felt buoyed up enough to dredge the remaining crusts through the cheesy, wine-rich sauce whenever I thought nobody was looking. 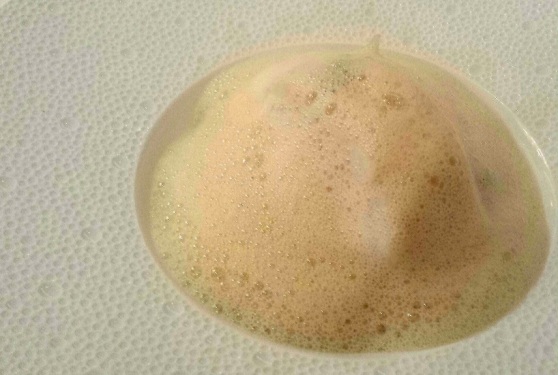 It might look like it’d be gone in a breath, but it took long enough to savour (all that good stuff was under the fish) to be able to get fully tuned into next-door’s convo, who were discussing, disconcertingly, how Junior quite fancies a drone for Chrimbo. Oh London.

Wasn’t that arsed about pudding, a tiramisu that was heavy on the coffee and whose biscuity-insides tasted – and, given the force it took to whack them into submission with, felt – like they were a tad over-baked.

I needn’t have worried; as if all that had gone before wasn’t enough, an array of chocolatey, fruity, showy-offy petit fours are plonked in front of you to go with the (dead good) espresso. These were bang-on.

All that, plus half a bottle of wine**, for just short of 50 quid at lunchtime seems a bit of a steal in coined-up Mayfair. I’d pay about £45 for that bread, butter and bordelaise alone.

Service, as you might expect, is friendly but down to business.

*I’m not alone in the bread love-in.

**If half a bottle doesn’t quite hit the spot, they do plenty by the glass. Apparently.