Some time ago, when the two institutions got together for a beer and food match thing, we spent a merry evening getting slowly sozzled at The Sparrow and simultaneously filling our faces with some bits and pieces from Prashad, (Gordon Ramsay’s favourite restaurant, etc etc).

We were already liver-soused Sparrow-soaks by then but it was our first foray into the food from Prashad, and it didn’t disappoint. Amongst other good things they did something magical with coconut, managing to make it not only edible but more-ish, too.

(We later learnt that these were Pethis – spiced potato balls with coconut. If they’re on the menu at Bundobust, try them. If they’re not, kick the chef in the shins ‘til they are.)

A couple of other similar events took place. All sold out. Lightbulbs flashed on top of heads.

On reflection I like to imagine this coming-together as being akin to when Mr Rolls met Mr Royce but with beer, pakoras, and the background hum of wailing-siren, common around these parts of Bradford.

Fast-forward a bit and here comes Bundobust. It is, as most folk have probably read elsewhere, “a craft beer bar with an Indian street food kitchen.” Course, they had to inconvenience us and build it in chuffing Leeds, but it’s right near the train station so you don’t have to amble too far.

When we went over for a scan there was a convivial canteen-y atmosphere which made for a pleasant racket in which to drink strong beer* and forget you’ve got work the next day.

It’s a big enough place to house the masses (“bigger than you think” was the most-uttered sentence of the night) whilst also retaining the Friday-teatime-at-the-Sparrow ambience; where there’s always time for one last drink and when ‘bus home and cook’ becomes ‘taxi home and takeaway’.

Look at his happy face.

There’s a clever outside/not-outside bit, too, where you can fill your lungs with that famously fresh Leeds air/nicotine without running the risk of getting rain in your pint.

We got to snaffle a couple of food samples that suggest kitchen-goodness for when they fling the doors open onto Mill Hill properly on 11th July.

Whilst the Bhel Puri, with its samosa pastry and tamarind chutney, was crunch, tang and vibrant sharpness, the Spice and Rice – slow cooked mung beans on basmati – was a subtle, slow burner of a dish, full of aromatic spice and a nice hit of polite heat. 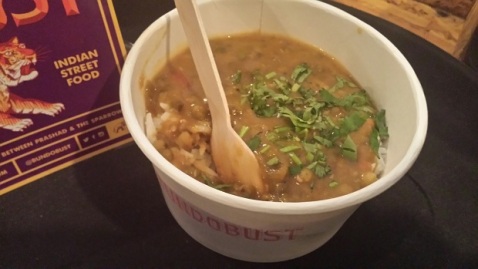 Regardless of which we preferred, (we debated hard but can I have the recipe for the mung beans please? ta), both had the welcome feel of home-style cooking shaken up for the modern punter. “Well nice” was the seasoned-gastronome’s description attributed to both.

Eating isn’t a prerequisite of visiting, by the way, but it’d be daft not to, in the same way it’d be daft to go to Belgrave and not eat those chips.

Madness, even, if you look at it like that.

*other drinks are available. Beards optional.