It was time to go home.

We’d sauntered around the shores of Scarborough and rambled the rain soaked walls of York. We’d dandied around Durham and, well, God knows what happened in Newcastle other than to say that after the previous night’s meal both the wallet and soul were significantly emptier than when we’d arrived.

Regular readers (HAHAHAHAHAHA!) will recall that on our previous visit to The Design House a quick spot of lunch descended into a full-on, 8 hour, wine-fuelled beano. Thus it simultaneously became one of our favourite places to eat yet also somewhere to leave for a few months in an effort to eradicate from the mind any embarrassing behaviour on our part.

Our triumphant return would be the last port of call before a month of beans on toast. 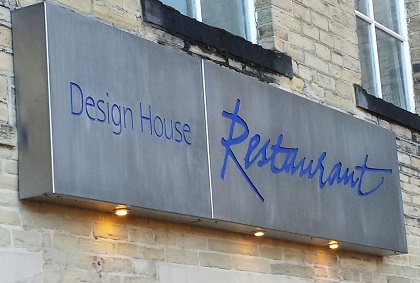 Now, we could talk about ‘Restaurant of the Year’ this, or ‘ex-professional Masterchef finalist’ that, but despite all that being impressive, it’d be a bit obvious.

Instead, a compare and contrast exercise with a similar high-end, best-shirt-type place we’d very recently visited:

Do yourself a favour. Head down to Halifax and get a table at The Design House. (Treat yourselves and travel First Class – at your prices it’ll be a snip.)

When you get here you’ll notice that a G&T costs the same as at your gaff, but that’s where the similarities end.

The first thing you’ll notice is how confident the Front of House lot are. It’s smooth. They smile. And even though they’ve undoubtedly been well drilled with what’s what on the menu, they still manage to be natural with it. Friendly, eh?

The food’s not too shabby either, is it? That lot in the kitchen are the best kind of smartarse show-offs who care about impressing you and want you to eat well. And they’re not shy with the seasoning, either. Imagine.

It’s lively and it’s almost a full-house but there’s someone in the middle of it all in complete control who knows what’s what and, therefore, so do her team. Safe hands!

Nice to sit back and relax, innit?

On our last visit we’d had a ‘forest floor’ dish of mushrooms that was so pungent and full of flavour it was still bouncing around the skull the next day. If the food then was ‘really damn good’, it’s kicked on again to the dizzy heights where only a sweary word would suffice.

Yorkshire Puddings – cooked until crispy but still with a nice bit of heft – and pork crackling served at the bar was always going to be the start of a pleasant evening. We also snaffled duck cigars and chicken terrine on sticks. Bit posher than the usual scampi fries. 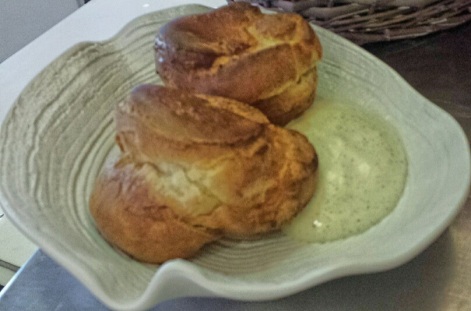 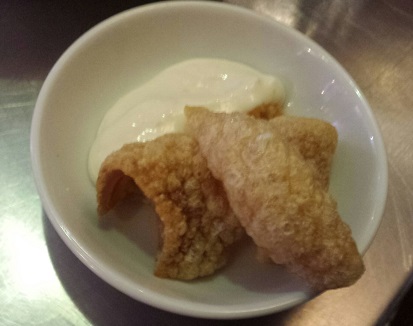 Razor clams, cooked over coal at the table, were as good and fresh as they sound. Snails were pungent and meaty. Blowtorched hake, which we loved, was light and and with bite. 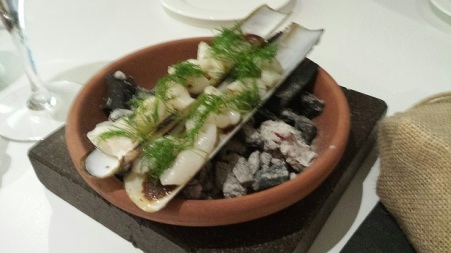 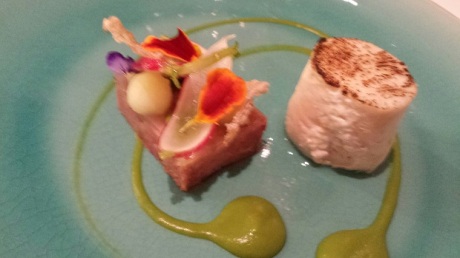 A salad, ingredients picked that afternoon, was fresh and crunchy and well worth a place on the menu. But fear not salad-scowlers – they do meat, too. We had excellent beef, rich duck and succulent pork in various guises.

We had dessert(s) but of course by this point we were too pissed to be taking note of the dishes before us. Sorry about that. I know we made short work of them.

It’s fancy cooking, for sure, but without pretentiousness, and for all the Street Food movement rolling on in Leeds – of which we’re massive advocates – there’s a gap over there for this kind of place. (Granted, The Man Behind The Curtain will help to fill the void.)

The Design House gives the punter playful, inventive, high-end cooking where quality, on all fronts, is taken seriously but it’s still informal enough for you to drink excessively and fall over. Apparently.

And just a short train journey from Leeds, too.