“Are you sure you want to do the wine flight?”

“It works out at just over a bottle of wine, between us, for 70 quid”

We should have stayed downstairs. Downstairs, all was well. Sipping a ‘Godfather’ cocktail – whisky, amaretto and orange in one glass – it’s hard for everything to not be well.

Downstairs we had snacks.

If the chicken liver pate cornetto – the cone crisp and curried, the pate inside smooth and rich – bought wry smiles to our faces, the oysters that came next prompted facial expressions usually only achieved by actors in softcore films late at night on those Sky TV channels. The things we did to the shells belong in those films, too.

Downstairs was a happy place.

Then up the wooden hill we trooped.

To be fair, that fennel veloute – the first dish of the 6 course tasting menu – was good. Well; decent. And food-wise we stuck on ‘decent’ for the remaining courses. Nowt particularly bad, just decent. 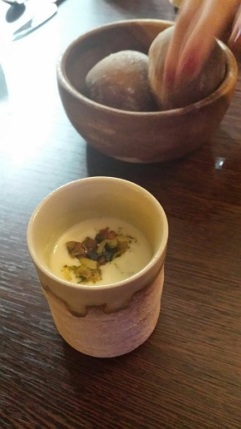 The veloute pots were taken and the first glass of the wine flight was bought out. There was a brief description of the wine, but no reason given as to why it would work with the next course – a quail terrine.

Was the wine any good with the quail? Dunno. By the time the food landed twenty minutes later the wine had been pretty much necked. 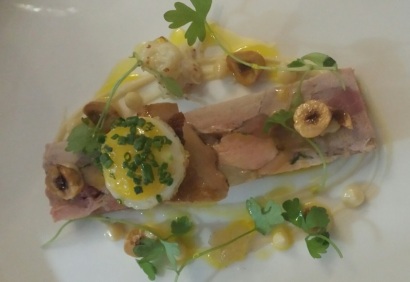 “Bit weird”, thought we, “to bring the wine before the food when the two are meant to be one harmonious coming-together.” That’s our take on a “wine match” anyway. P’raps we’re daft.

Benefit of doubt given.

Salmon next. Cooked decently, but no sign of the ‘curry’ flavour the menu promised. Bit subtle; a recurring theme over the next couple of hours.

Plates cleared. Next wine dispatched, this time an Italian number which, after asking, were told would really bring out the flavours of beef and asparagus.Sounds good!

Thing is, we weren’t having beef, we were having pork.

Any good? Looked decent; tasted… decent. Enquiries were made about the mystery wine. Clarification never arrived.

We’d been told downstairs (oh, lovely downstairs) that after the pork someone would take our cheese order. No cheese order was taken. We were cheeseless. We pointed this out and were told ‘usually you have cheese later’. Naughty us.

Ta for that, but it’s on the menu after the pork. We were, at this point, post-pork.

We’re not going out of our way to be extra-critical here. We wanted to love it. We’d been on a bit of a food-based trip hither and thither (of which more to come) and House of Tides was meant to be the big-hitter of the week. Kenny Atkinson, innit. That nice fella off the TV.

Well, that’s what we’d hoped. And at £90 per punter for the shorter tasting menu plus wine flight, it’s fair to say it’s what we’d expected.

When we’d done a wine match before, over in sunny Manchester, the sommelier had enthused, enlightened and enjoyed the duty of explaining why this wine went with that dish, and chucked in a few nuggets of info that we could later show off ourselves.

None of that here. A £35 wine flight gets you a glass of (average) wine delivered dispassionately and long before each (average) dish itself showed up.

No spark or sparkle. No wit or wonder.

“We’ve only been open since January,” said front of house gaffer at the end.

“And we’re 230 quid down,” said we; forlorn, dejected and light of wallet.