“Here’s an idea. Now that we’ve necked the beers, drained the Prosecco and bottomed that good bottle of white – now that, truth be told, we’re pissed – how about we get a bottle of red?”

“What, just a bottle of house?”

“Nah. That bottle called ‘The Boxer’.”

“It’s my birthday. It’ll be fine. We’ve had an espresso.”

As, seemingly, the rest of Calderdale descended on Shibden Park to bask in crates of Carlsberg and disposable barbeques on the hottest day of the year, we hung a right, escaped the traffic and dropped deeper into the valley to while away the afternoon at the Shibden Mill Inn.

Living not too far away we’ve probably taken it for granted. We shouldn’t. It’s a gem.

We’ve waxed lyrical about the Blue Lion up in t’dales before, and it’s easy to see why both these boozers are part of the same ‘Great Inns’ collective. You’ll find both in all those good food/inn/pub guides you can buy (or peruse for free in Waterstones).

Justifiably so: as well as being a handsome old place in an idyllic setting, the food’s pretty much bob on, too.

Having spent the last few weeks honing our one-handed eating skills by way of shovelling burgers, tacos and all that other new fangled ‘street food’ down our throats, it made a refreshing change to use actual cutlery for a change.

Starters were on the money and generously priced. Crispy duck eggs, once scythed open, prompted “the Greg Wallace slow-nod” as the yolks oozed onto the plate and, although they’d had a good swim in the fryer, there were no greasy pools. Nobody likes a greasy pool. A sweet potato crisp meant it was healthy, too. (£6) 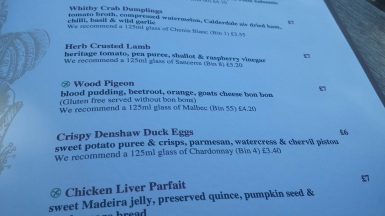 Wood pigeon was cooked perfectly. (Grandiose statement, but true.) The blood pudding ‘sausage rolls’ that came with it could/should be eaten by the dozen. (£7)

A minor quibble came with the stuffed pigs trotter; the quibble being we weren’t sure what it was actually stuffed with*. We were sure, though, that there wasn’t enough of said unknown-stuffing and even (or especially) taking into consideration the dolls-house pan of triple-cooked chips (five thereof) it was, at 16 quid a pop, p’raps pushing it a bit. 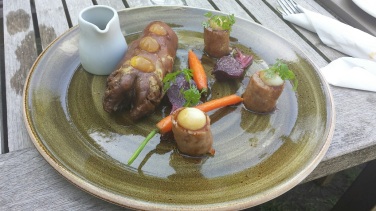 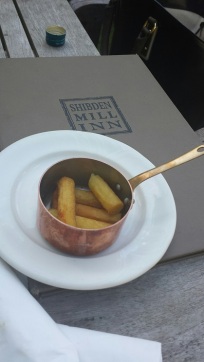 A bowl of king prawn and clam linguine got us right back on track, though. Pasta; egg-yolk golden. Sauce; just enough, and, to quote Rick ‘The Steinster’ Stein; the seafood was ‘ozoney’. No scrimping on the portion, either, and at £10.95 well worth the extra couple of quid you’d normally pay in a standard high street Italian. 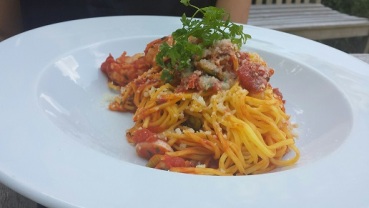 Usually, at this point, thoughts turn to desserts. Not so for us. We were in the endgame with our friend The Boxer**; a full whack-around-the-head bottle of goodness from Australia. A bottle the term ‘complex’ was made for. 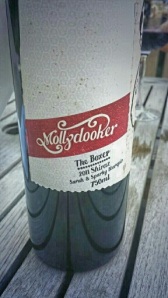 Look at that description: “super rich… opulent… incredible power…aromas of tabacco”. It sounds more like a Bond villain than a bottle of red wine.

We were on the ropes. We ordered espressos to counterpunch.

The Boxer laughed in our faces.

We hit the deck. (Literally.)

We ordered a taxi.

*we emailed to ask what the stuffing was, but no reply as yet.

**if you like your wine, have a look for this, from these: mollydookerwines.com