There was a time, long ago, when staying up beyond 10pm was biologically possible without the now-requisite pre-going-out siesta, the brace of espressos and a brave face.

Such evenings of wild derring-do usually involved copious pints of Carling Premier (5) washed down with shots of Aftershock (2, max), after which we’d pay our weekly visit to a ‘rustic’ little establishment in downtown Cleckheaton and place our individual orders for a portion of chips and a single chapatti.

Yep, we knew how to live.

Having doused said chips and chapatti in cheap ketchup, they were re-wrapped, taken home and eaten whilst watching Eurotrash. If you were lucky, the rude bit hadn’t been on yet.

(There are, though, plenty of Sky channels filling the Eurotrash void. Apparently.)

So having heard Rola Wala and their “twisted Indian street food” were heading to Trinity Kitchen from the Big Smoke, bringing with them naan breads filled with stuff, a chance to regress presented itself. Better still, there’d be no need to stay up beyond 10pm. 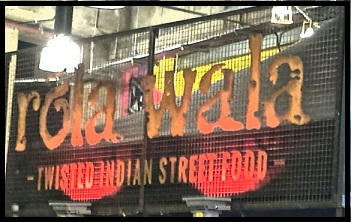 And it’s fair to say that their Coriander Chicken Tikka Naan was more than a cut above that cardboard-textured favourite from years ago.

This is our type of food; bread toasted but still chewy, long-marinated chicken that was charred but moist, topped with fresh, punchy salad.“Vibrant”’s the word here. And with a nod and a wink to that wild 18 year old within, we even added the Scorpion Chilli for extra oomph. 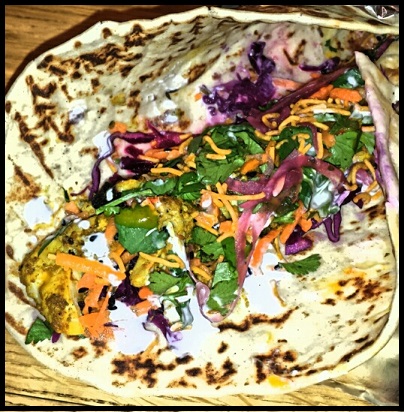 Perhaps we’re just tight northerners, or perhaps we regressed too far and believed we were back in the mid 1990s, but the 7 quid asking price seemed a bit steep. But hey, the bottom line is the food was superb.

This did lead us to discuss the rise and rise of street food’s popularity and, with it, the potential rise and rise it’ll cost to eat the stuff. But then we had a beer.

Another £7 bought us a Taste of Everything from the popular Bang Wok stall.

Generous piles of beef curry, coconut chicken and honey, garlic and coriander pork shared a plate with rice and crunchy salad. The beef, we thought, stood up to those heady aromatic spices the best, and a return visit to try that by itself has been duly added to the agenda. If it wasn’t for the booze we kept finding ourselves buying we could have got away with calling this a virtuous option. 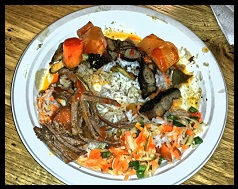 A walk up to The Social for our maiden visit probably wasn’t enough exertion to fully work off what we’d just consumed but when you hear the words “chorizo and potato stew” and “£3.50” in the same sentence you’re duty-bound to find a little extra room.

Here was a dish of stew fully deserving of that usually over-used term “honest, home cooked food”. A fiver would have been a generous price but £3.50 was a giveaway. And it’s not as if you’re making do for a cheap option, either. It’s good, tasty fodder: a deep rich tomato sauce with chunks of chorizo and big bits of just-yielding potato bobbing about. It’s served with a hunk of crusty bread, as is right. 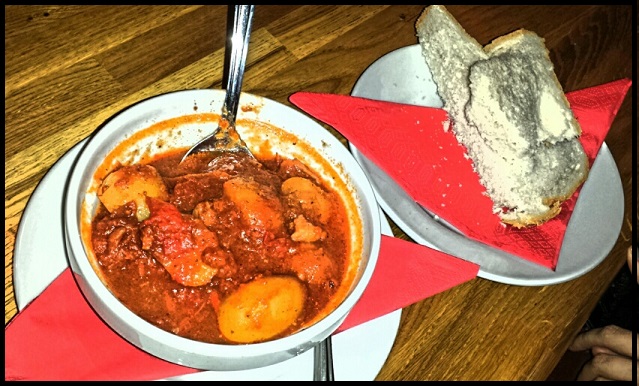 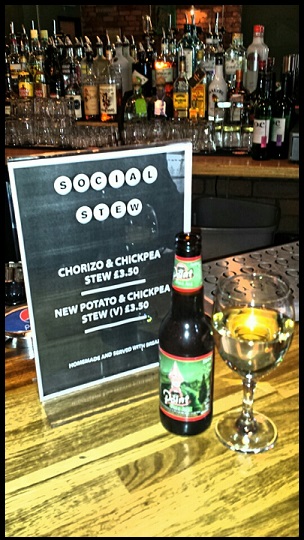 We managed to get a good beer and a glass of wine with that bowl of goodness for under a tenner.

We also managed to get home before 10pm.