Having wandered past the handsome Sam’s and Mr Thomas’s Chop Houses in Manchester, (usually on a Sunday, in search of a restorative roast), and been tempted by the menu’s  promise of simple, traditional fodder, the opportunity chucked our way by Leeds List to give the Leeds branch a go was duly and enthusiastically accepted.

Like its siblings across the pennines, this is a stout and solid old building in a prime location. It looks and sounds promising, but mulling over a drink at the bar there’s a whiff of Wetherspoons ambience to the place. Bit of a shame as the dining room is full of promise and character.

Food started well with a rich and well-textured ham hock scotch egg. The celeriac coleslaw that came with it was possibly the best bit of the meal. It was genuinely excellent, but probably not what the kitchen intended to be the star of the show.

The other starter arrived – corned beef hash cake – which looked inviting but, well, wasn’t what we ordered so had to be sent back.

Out came the goats cheese rarebit. We’d been looking forward to this dish all day but it turned out to be a homage to balsamic vinegar and caramelised onions. There was, unfortunately, very little tang of mustardy cheese and what did come through was doused in the too-sweet sauce.

There’s a newspaper cutting downstairs singing the virtues of the corned beef hash. I noted it was from 2008. Times must have changed. Toothsome meat melded with onions and crispy potatoes sounded like just the thing for a rainy teatime but as it cooled it became a textureless mush of butter and cream laden pate. 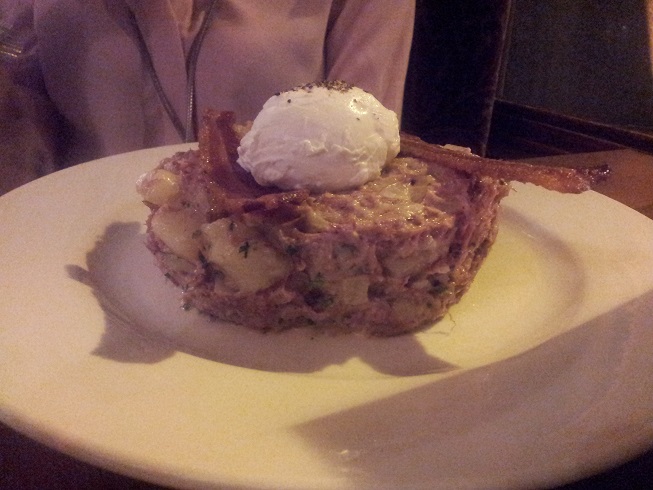 Steak and kidney pudding was decent. The beef had dried out a bit but the crust was stodgy in the best sense of the world.

Service was hit and miss. The wrong food came out. We had to chase after the water we’d asked for. Wine was poured without us being asked if we wanted to taste it. (We wouldn’t have been bothered about that had it been delivered with a little character). One member of staff was all smiles and couldn’t do enough. Another appeared to be bored senseless.

We love simple food done well, and Sam’s Chop House sounded right up our street, but this was an evening of ups and downs.

Unfortunately, for us, more downs than ups on this occasion.