I’m not usually allowed to order pork. “Depressing and bland” she says; probably about cooked pig but potentially about me.

Even Asbestos Tongue’s game for this quiveringly moist wedge of the stuff, though; the jiggly denouement of another mostly satisfying visit to Ricci’s Tapas and Cicchetti down there in Halifax.

Granted, the 9 quid price-tag seems a tad steep for what amounts to a few yielding forkfuls but it’s been in a low oven for that long we’re probably just about covering the ‘leccy bill at that price, and the presence of good, golden crackling helps shoo away any lingering tight-git doubts.

There were prawns, too. Succulent belters with a proper slap of salt and spice to them, and whose pooling juices made for a gratifying dredge with finger, chip and/or bread. (£6)

If the golden, just-cooked linguine in the seafood pasta isn’t homemade it’s been well-sourced, and the tangle of mussels and prawns within deliver on their hit of seasidey twang. (£8.50)

The goats-cheese stuffed peppers would’ve been a lovelier little snack if they hadn’t been as fridge-cold; and has someone’s knacked up the aioli recipe? The gutsy one I remember would bed down in your pores for weeks. This one seems far more prim. 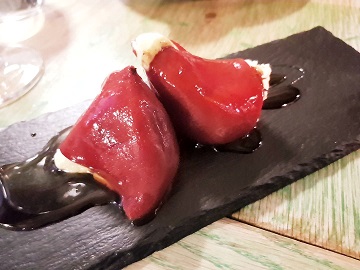 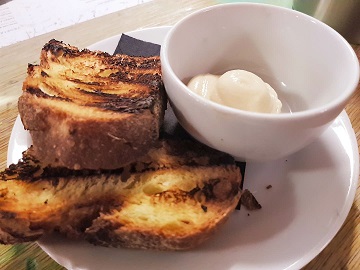 The bar around the corner – owned by the same lot as Ricci’s – has a website that speaks harrowingly of ‘vibe’ and ‘mixologists’. I’ve been. Bit showy.

I still like this spot though, where there’s just enough of the industrial air-venty patina that everyone does nowadays without it feeling too much like you’re eating your tea inside a dishwasher.

The pedant in me, always on hand to ruin a good evening, is irked by the ‘Tapas and Cicchetti’ bit of the name though. A 12 quid chunk of beef with spiced scallop, tempura oyster and seaweed is stretching that “beery snack” definition a smidge too far for me.

Also, (and I don’t blame our server for this) there’s no need to over-pour the wine and then try and push more drinks on us, ta. We’re well practiced at getting blotto and require none of this “persuasion”.

But that’s just me being a picky prick. It’s certainly not the only spot to take the tapas name in vain or try and make a few extra quid on the booze, and the handful of dishes we’ve necked – on the whole, deft cooking of boss bits and pieces – reinforce why it’s still a local favourite that can do a bustling trade on a Monday night.

PS: They’ve got another gaff I liked a lot, as well as a spot in that Leeds.