Previous visits to Manchester’s Midland Hotel have always been of a late-night, post-prandial nature. What better way of seeing out the evening than with an over-priced and under-chilled bottle of Becks before scuttling to beddybyes in the cheaper hotel round the corner?

A novelty, then, to visit the place not only in sobriety but to be whisked beyond the curtain separating restaurant from bar into the smarter environs of The French: formerly yer lad Rogan’s gaff, now under the stewardship of Adam Reid with the good hair. Him who won the pudding round in last year’s Great British Menu.

This being our maiden visit I’m not sure exactly how the decor’s been transformed since the baton was handed on. It’s a cosier space than I’d imagined, although still handsomely decked out, and I think I read something about things being a bit more relaxed than before. A lively 6Music-leaning playlist sees to it that tones aren’t hushed as one necks ones scran; someone’s even stuck Kasabian in for a bit of a laugh.

Lunch remains the best way for a tight-arse to get amongst some quality cooking at these high-end gaffs, and here we flatten the full flotilla of keenly priced “snacks”; each a punchy hit of slick technique and contrasting textures.

Any true buffet connoisseur will want to have a dabble with this creamy cod’s roe dip and the pile of accompanying squid ink wafers (the crispy sporn of Skips and Quavers) for their next spread. (£3) 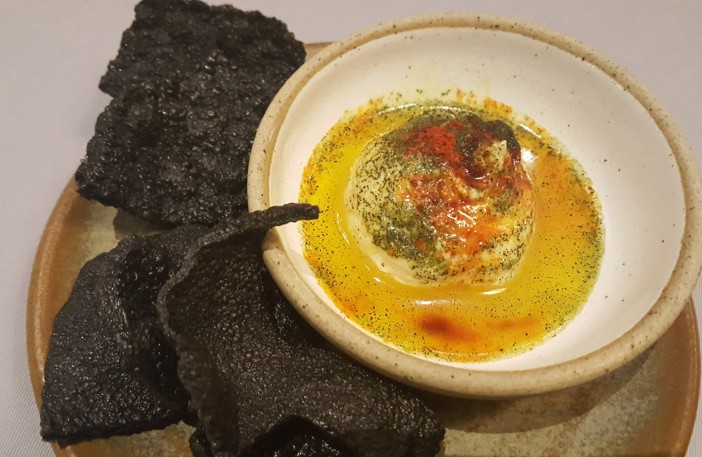 Pigs trotter and belly had been Panko’d liberally – a crunch of goodness in itself but doubly tasty when dredged through the pickled onion monster-munch dip for a thumping thwack of sharpness. 4 quid for this belter.

A couple of down-in-one “tacos”- one prawny, one scallopy, both spiked with bright, fresh herbs – were classy little morsels at £4 a throw. These arrived on a sheet of puffed rice flavoured to the bollocks with salt and vinegar, at which point I reflected that any chef this smitten with crisps is a kindred spirit of mine and can pretty much do no wrong.

Skillfully cooked shoelaces of saffron pasta from the “plates” section – up in size a notch from the snacks – came with salty chicken skin bites and a slightly over-done, but still luscious egg yolk. (£8)

Someone in the pastry section knows their way around, um, pastry, given the crispness of shell to this tart, encasing a velvety mousse (spuds and Mrs Kirkham’s cheese) and topped with (I think) distinctive powdered lovage. As with most things in life, a splodge of salad cream would’ve been welcome. Heinz, of course, if we’re to impress the Michelin Mob. 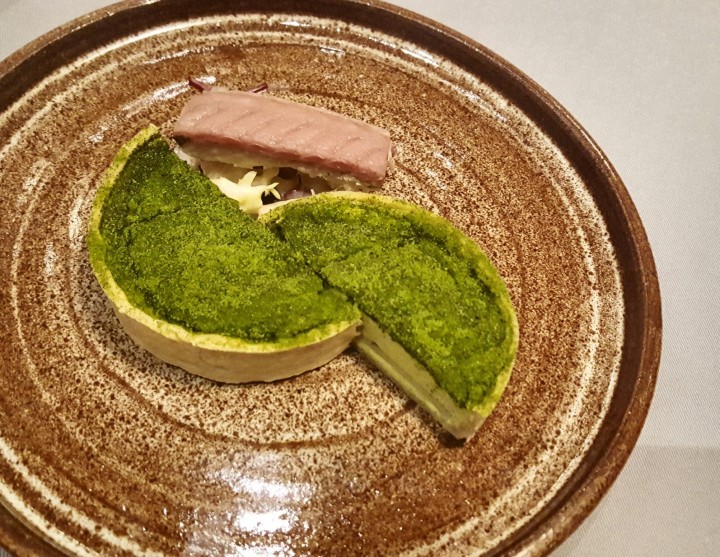 There was more. In addition to some top-notch bread and butter – practically a course in itself nowadays – we’d scoffed some broccoli so we could nod at healthy (it was battered), and buttery cauliflower that came in a mellow pool of kind-of ajo blanco sauce.

Strangely enough given its success in GBM, the only dud note of the day  was the Golden Empire dessert: in essence a scaled down then gussied up apple crumble. There’s no shortage of technique (cold stuff, crunchy stuff, gold stuff) and it was by no means bad, so perhaps it was the 15 quid price tag that prompted my ambivalence.

But let’s not concern ourselves too much with that. Those preceding courses had been little skits of smarty-pants cooking at prices you’re unlikely to find in many other places doing That Fancy Food. The full mashings tasting menu will ask more probing questions of your bank balance of course, but if you’re into this kind of pinpoint cooking, and you like crisps, you’re in safe hands.

Wine: the 6-quid-a-glass Beaujolais adequately did the job. From there the list hops around some impressive gear with prices to match.