A return trip to the Reliance in Leeds, first.

In the nose-bag this time: meaty mackerel doused in a chermoula dressing, the spiky coriander and cumin combination wistfully bringing to mind the curries we’re lucky enough to have on the doorstep 9 miles down the motorway.

A pork chop – fat n’all – with champ; the lot lubed up with a cider and mushroom sauce. Pigeon, whose richness and gamey hum rewarded the minor surgery required to pick it apart.

And so to Harrogate, and Norse. Coffee shop by day (namely Baltzersens), proper-critic-endorsed restaurant by night.

Now call me a know-nothing prick – you wouldn’t be the first, you wouldn’t be far wrong – but I’m a latecomer to the Scandi-scran party. Words like ‘fermented’, ‘virtuous’ and ‘wholesome’ spring to mind, elbowing out others such as ‘triple’, ‘cooked’ and ‘chips’ that I tend to prefer.

It sounds clean, whereas I quite like a bit of muck knocking about the system.

But I’m a changed man. Here were 7 courses (tasting menu: £56) of, on the whole, vibrant and vivid invention. It’s telling that, for the most part, I can recall the menu without checking any pissed-up notes. I shouldn’t be surprised, really. I did, after all, watch the subtitled versions of both Borgen and The Bridge, so an affinity already existed.

Of the snacks, an ever-quotable Asbestos Tongue declared that “they’ve made seed taste nice”, which I thought was as promising a start as could be hoped for.

Slices of rich duck ham were followed by a verdant wild garlic soup veloute, horseradish cream and buckwheat crunch bobbing in the depths.

If the soup tasted as green as it looked, a crab dish was as clean as it looked. Crisp cucumber, earthy turnip and fermented (there it is) rhubarb adding not just texture but body to the tendrils of sweet meat. Fresh, is the word.

Striking as it was on the eye, a finger of tasty eel got a tad lost amid a jellied this and a sorbet’d that. I’d have liked a bit more fish and a bit less ‘stuff’. No shortage of technique on show, though.

Turbot in a mussel sauce with pickled clams goes straight down as one of the finest things I’ve eaten this year. The sauce had a distinctive lactic flavour, which I know makes me sound like a tool, but I couldn’t place if it was butter or milk, even. Probably neither. Either way, full marks. 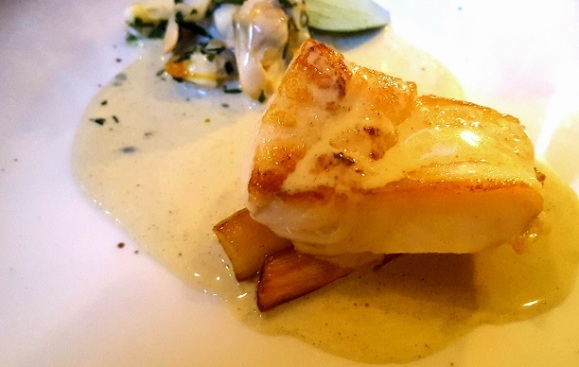 (Chef, take it as a compliment when I say the pickled clams reminded me of sousing Sarsons over boil-in-the-bag fish while watching Newsround, back in the day. We’ve all grown up since then, but it was tasty, eh?)

The novelty of a tasting menu can dissipate by about course 17, but here it’s a well-paced and well-plated affair, so we’re not to be defeated by a couple of appetisingly pink slabs of hogget – loin and belly – with crunch coming from glazed crosnes (me neither, artichoke stuff appaz) and parsnip. More top notch sourcing and saucing. 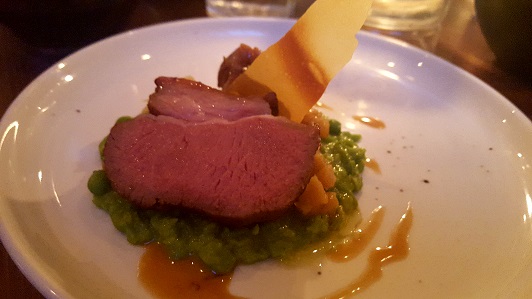 Rhubarb pops up again in the first dessert, poached this time, with cardamom meringues that, for a couple of sweet-swervers like us, strayed a little too close to a sugary edge.

Pistachio cake, however, moistened boldly with rapeseed oil and puckered up by something cold and fruity, was just the job. Belting. By this point we’d made inroads into a couple of bottles from the short list – plenty in and around 20 quid – and forgot to take photos.

We left having had our heads turned, our bellies satisfyingly filled and, thanks to the forward-thinking pricing system, with the bank balance 10% better off than had we gone on a Saturday. Good idea, is that.

And I won’t change channel as quickly next time him from Noma’s on the tv, with his berries.