Whitelocks recently celebrated the admirable achievement of three hundred years being in the business of getting people pissed. Heroes in our hearts. A misty-eyed, commemorative Pub Tea was in order.

It might well be come under the banner of ‘dead old’, but there’s none of that melancholic fug here that seeps out of other, similarly well-aged establishments.

On this visit – an unfashionably early teatime – there’s a continuous bustle of comings, goings, drinkings and eatings and it’s probably a good job we reserved a table in what we’ll call ‘the food bit’ at the end of the bar. ‘Dining room’ doesn’t sit right, here; this is convivial, unceremonious, homely stuff. You could well get bedded in for a right old session; many probably have,  many more probably will.

Course, there’s the faint tang of beer-weathered carpet in the air, but that’s to be expected – nay, desired – when out for a Pub Tea.

The menu, short and succinct, exists – unapologetically – to satisfy and sate than to dazzle or wow. And rightly so; this is food not for Instagram but for the belly. Here’s a kitchen quietly getting on with the job of feeding folk simply and generously. Help yourself to condiments. Amen.

Things to be got at include pie (sold out; bastard), a burger (just the one choice – gold star for that), and – because someone will always order it despite the abundance of good chippies up and down this Shire – fish and chips.

The absence of that ubiquitous shit-pub staple – Thai green curry done badly for Dave who likes his spice – is welcome.

A pork and black pudding scotch egg (natch) had a proper rustle to it and generous quantities of meaty stuff surrounding the timely-cooked egg, which retained a healthy amount of ooze. 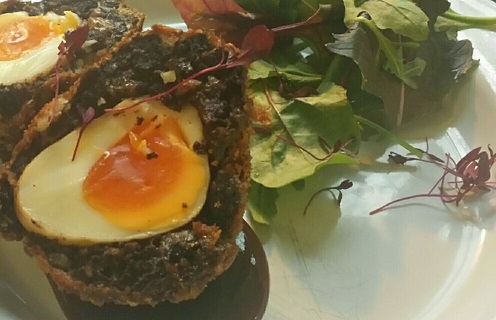 This ‘Yorkshire chorizo’ speckling the plate alongside some fresh, crunchy greens and fragrant mint leaves was spikily, punchily, ace. That lot on top of a springy crumpet was a new one to us but made for a lighter dish, which means more room for chips.

If Carlsberg did salads as well as (or preferably instead of,) piss-a-like beer, this one of black pudding, potato and spinach salad would be it; which is to say light on the green bits and heavy on the ballsy gear. With the addition of a crispy fried egg. Pub salad. Wolfed down. 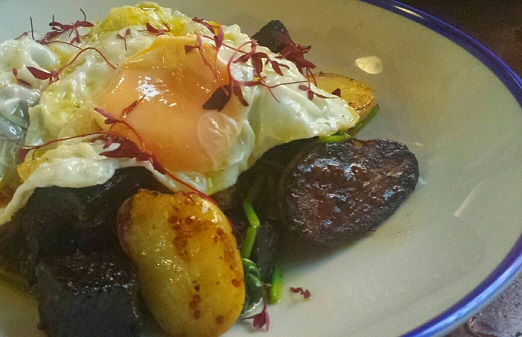 Quality sausages from that posh place in Ilkley were dense, peppery, buffed and bronzed.

Mash had been liberally buttered and creamed but kept enough body to demand the gob does a bit of work. The powers that be should have a think about making that gravy – all reduced stock and roasted meaty bits – available on cask. 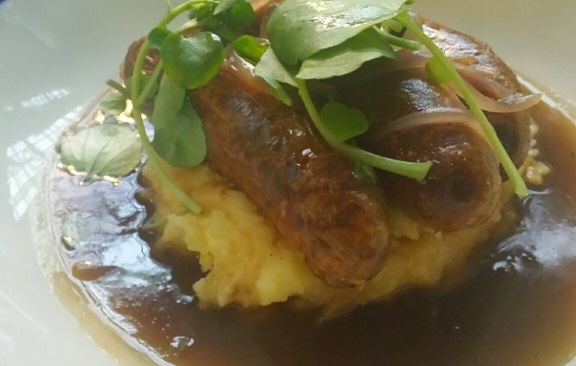 Course we ordered fish and chips. Restaurant/pub versions are never quite the same as over-the-counter versions, (embrace the grease, people in proper kitchens,) but here we did get a dead good, dead rich, tartare sauce to douse over some accurately-cooked, crispily-battered fish.

This is unfussy, generous fodder, for sure, and ‘quality pub grub’ might sound like damning somewhere with faint praise. But balls to that; this is stuff you want to eat in a place you want to sup, and the two go happily hand in hand.

Starters hover around a fiver, mains; a tenner.

PS: Get corned beef hash on.