There’s a belief amongst some that ‘fancy’ restaurants care more about style than stomach; that ‘posh’ food must necessitate a stop-off at Dixie’s on the way home in order to reach full-bellied gratification.

Hand on artery-clogged heart, that’s never been the case for us. Even that tippy tappy lunch at 21212 prompted a post-chow Zzzz.

It’s certainly not the case at The Kitchin where him-off-the-telly Mr K is quite the munificent host. Can cook a bit, too, as it goes.

We choose to spend a couple of hours getting acquainted with the Seasonal Tasting Menu, after which we swear that we never need to eat again. (That homecoming bacon sarnie on the train the next day wasn’t going to eat itself though, was it?)

The ‘Nature to Plate’ ethos is a big deal here, resulting in generous plates of humble stuff gussied up – just enough – but allowed to show the best of itself.

It might sound like something that’s come out of a Nutri Bullet, but a carrot veloute specked with sharp apple and fragrant ginger is a perky warm-up to the main events.

A bright, firm-fleshed mackerel tartare is zinged up with a lemon crisp and a sparky lemon crème fraiche. This balancing act of textures and flavours is bang-on throughout tea. Everything’s seasoned ‘and a bit’, we reckon; an approach that merits a gold star from us.

Crispy ox tongue ups the richness levels a notch, and comes doused in a Sunday lunch gravy on steroids. Earthy asparagus adds some veggie balance; that it’s wrapped in salty pancetta doesn’t, to us, diminish its 5-a-day status. In fact, boffins, perhaps you should suggest swathing all fruit and veg in bacon if you want people to eat more of the green stuff.

Hake is a hearty, crisp-skinned thing of pillowy goodness. Strands of wild garlic, meaty prawns and a light sauce that hums of the sea oomphs the freshness factor.

We take stock. By now, we’re proper full. They bring rabbit. And artichoke. We soldier on.

It’s as brilliantly executed as anything else on the menu, but given what we’ve already snaffled it takes us a while to get through such a strong dish. As a stand-alone main course we’d have demolished it, but perhaps something lighter could go in that slot. Or perhaps we’re just amateurs.

They nail dessert; a smooth and creamy strawberry panna cotta offset with chewy meringue. Crisp, dehydrated strawberries and shreds of pungent orange peel make it refreshing as well as indulgent. 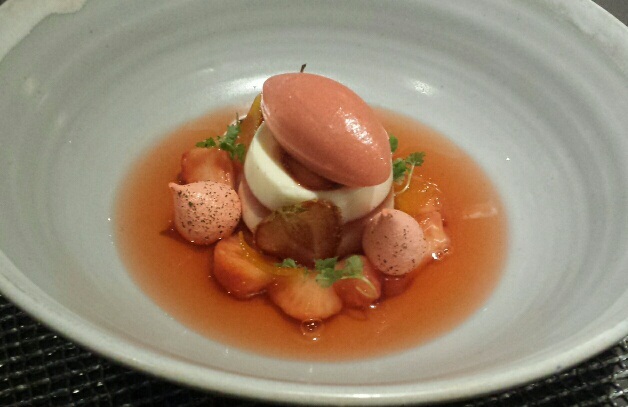 Front of house are an eagle-eyed but unstuffy bunch. There’s no sign, in service or scran, of the prissiness or tightness some might associate with a Michelin starred gaff. This is hearty fare, coming out of a kitchen that doesn’t prick about too much with some quality produce. It goes down as some of the best stuff we’ve eaten all year.

The Celebration of the Season tasting menu costs £75 each for dindins. As ever, have a gander at the lunchtime deals where 30 quid value is to be had.

One thought on “The Kitchin, Edinburgh: Review”