The setting was ideal: a crisp autumnal day in Bronte Country. Shelter and sustenance required. Even better; this was a Sunday. A day for gravy.

And, certainly, that first pint of Black Sheep started to thaw the bones from the cold outside. The bottle of Malbec that followed did a pretty good job of that, too.

Refreshments were helped along with some good starters. There was a pea risotto with parmesan crisp (“like the best crisp in the world”) and a couple of generous, fresh fishcakes with spiky tartare. 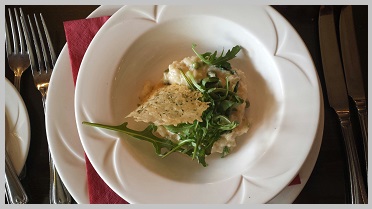 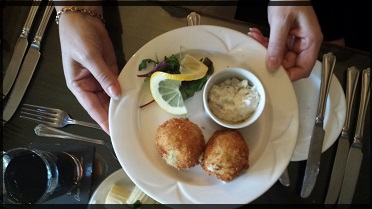 Chicken liver pate was excellent. A bit smoother than the stuff you usually get but gamey and rich and fresh and thisisgoingtobeagreatmeal good. 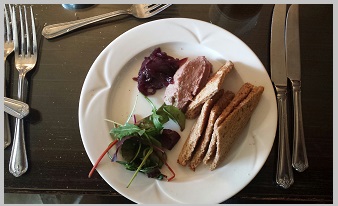 All came with some moreish freshly baked bread. 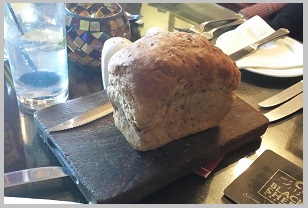 Alas. For the main event, things went a little awry. Having wowed us with the starters it seemed like laurels were rested upon.

It’s not like we asked for rare beef, although that would have been welcome. We just asked for some of the pinker stuff but were told “it comes as it comes”.

Which wasn’t pink. In fact it probably last saw pink a good few hours earlier. This had the texture of beef you buy in packs to make a sandwich that you’re never that bothered about eating. 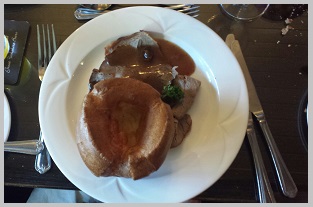 The pork, with its ‘comet hither’ crackling looked good but the meat itself was tough. It came with decent mash; lumpless, buttery and flecked with pieces of rich black pudding. 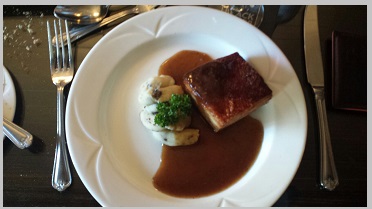 The accompanying broccoli and carrots were, let’s say, ‘traditional’ in that a knife had sliced and water had been boiled. The roast potatoes had the dry appearance gained from one too many dips in the deep fat fryer. 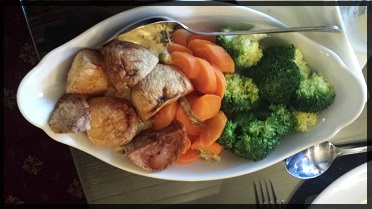 None of this is to say that it was terrible. It wasn’t. We were hungry and we ate. And the starters were good enough to suggest the A La Carte could be worth a return hike.

But the main courses just felt a little half-hearted. In these days of round the clock cooking shows, people expect a bit more for Sunday Lunch.